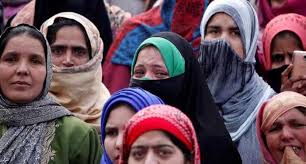 Srinagar, Oct 15: Amid increase in domestic violence, women in Kashmir have to move from pillar to post for justice in absence of the women’s commission.   Women’s Commission Srinagar has been shut down by the Central Government after abrogation of Article 370 among the six commissions on August 5 last year.   Since then several women in Kashmir have to bear the brunt of domestic violence and have to remain silent in absence of any women’s commission.   “My husband often beats me. I can’t complain to anyone as there is no women’s commission in Kashmir. I don’t know whom should I approach for justice,” said Sakeena Bano (name change), who is the mother of two children.   She was married to Bashir Ahmad in Old City Srinagar seven years back. “If I tell anybody, I will be thrown out of home, where will I go then? My parents are no more. Who will plead my case in a court so I prefer to remain silent?” she said.   This is not an isolated case. There are many women who are facing domestic violence including physical and mental torture or whose cases were pending before the commission. “My husband and his mother treated me unwell. In June last year I approached the state women’s commission and was expecting justice. But I don’t know where to approach now as women’s commission no longer exist in Jammu and Kashmir,” said Saba Jan, a resident of Pulwama. “I faced a lot of abuse at my in-laws house. I don’t know what to do now,” she said, who lives with her parents along with her son.   Kashmir has a defunct legal system catering to women’s issues. A single police station placed at Srinagar handles all the cases of violence against women.   Supreme Court advocate Vasundhara Pathak Masoodi who has remained the last chairperson of State Women’s Commission said she still receives complaints from girls of J&K.   “They don’t have a support system to cushion them during their struggle for justice and here the existence of the Women Commission was very crucial for them,” Masoodi told news agency Kashmir Indepth News Service (KINS).   Asked what needs to be done to stop domestic violence, she said, “I strongly believe awareness and reaching out to the gullible is the greatest panacea in such matters. Most of the women whether local or non-local were not aware about the powers, functions and jurisdiction of the Jammu and Kashmir Women and Child Rights Commission. Ever since I joined, my first and foremost priority was to sensitize the masses about the existence and working mechanism of the Commission. Further we slogged our level best to spread awareness regarding the powers, functions, jurisdiction of the Commission vis-à-vis the awareness regarding welfare laws/policies and the corresponding remedies available. I had also recommended opening up of district level windows of Commission to enabling the victims living in rural and far flung areas to avail the legal remedies available to them. It was my endeavour to take the contours of justice to the door step of women and children and ensure the accessibility of justice to each and every one.”   She said, “We also envisaged conducting the district level hearing of cases, unfortunately, the Commission ceased to exist post 31.10.2020 and we were not able pursue much. I was personally in talks with developer of 181 helpline to make it functional pan Jammu and Kashmir, similarly, we wanted to hold sensitization programmes for police department and one stop centres for effective and efficient handling of not only domestic violence cases but cases involving sexual offences against women and children.”   Asked whether she still receive complaints about domestic violence from girls as we don’t have women’s commission in JK, she replied, “Yes, I have been flooded with countless of such complaints ever since the Commission closed down and especially the number of such complaints increased during lock down. Keeping in view the aggravating circumstances, I opened a special desk at my law firm to deal with such cases from Jammu and Kashmir as I was aware what women were going through after the closure of Women Commission in Jammu and Kashmir and we did our level best to take up such matters with the appropriate authorities.”