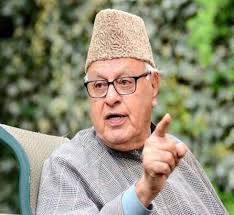 Anantnag June 28: National Conference President Farooq Abdullah Sunday said they (NC) won’t accept “illegal and unconstitutional” things done in Jammu and Kashmir. “We won’t accept everything done in Jammu and Kashmir which is illegal and unconstitutional. Do you think I am going to accept what is unconstitutional,” Farooq told reporters at Qaimoh Kulgam. He was replying to questions from media persons about the happenings taking place in Jammu and Kashmir post abrogation of Article 370 last year like framing of  new domicile rules in the Union Territory. As per news agency Kashmir Indepth News Service, he said, “Without unity you have nothing. The time we are facing is a trial from Allah. Ask Allah don’t put us in so much of trial. But we should not be afraid of trials. Allah might have kept something better for us,” “All prisoners are the same and there is no difference. They are all equal. I don’t differentiate between you and others. We are all one. Maintain unity for a purpose and not unity just for the sake of election. Unity should be of purpose,” he added. He has expressed concern over the situation along the Line of Actual Control (LAC) in eastern Ladakh and asked India and China to show restraint and engage in military de-escalation through dialogue. He was arrested last year then booked under the stringent Public Safety Act for months. Many senior leaders including PDP chief Mehbooba Mufti are still behind bars and internet speed is restricted to 2G. The fear of demographic change in J&K with the new domicile laws has caused anger and disillusionment among the people. (KINS)