Those threatening New Delhi on restoration of Article 370′ have lost their balance: MoS G Kishan Reddy 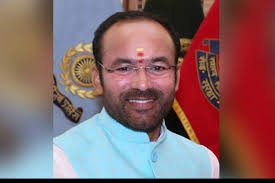 Srinagar, Oct 24: Minister of State (MoS) Home G Kishan Reddy on Saturday hit out at signatories of Gupkar Declaration, saying those invoking China’s help in restoration of Article 370 and threatens that nobody will raise tricolor till states erstwhile flag and rights are returned’ have actually lost their balance.
Reddy said parties including in the Gupkar Declaration have lost their balance. “One J&K leader says they’ll bring it (Arricle 370) back with China’s help, one says they’ll not hold tricolour. They’ve lost balance as they didn’t govern, rather ruled for years & looted money meant for development”, MoS said.
He asserted that abrogation of Article 370 has brought down the level of corruption in Jammu and Kashmir. “With Article 370’s abrogation, corruption is going down in Jammu and Kashmir”. he added. (KINS)

JK To Have Elect DDC