The 9 year old self made Millionaire. 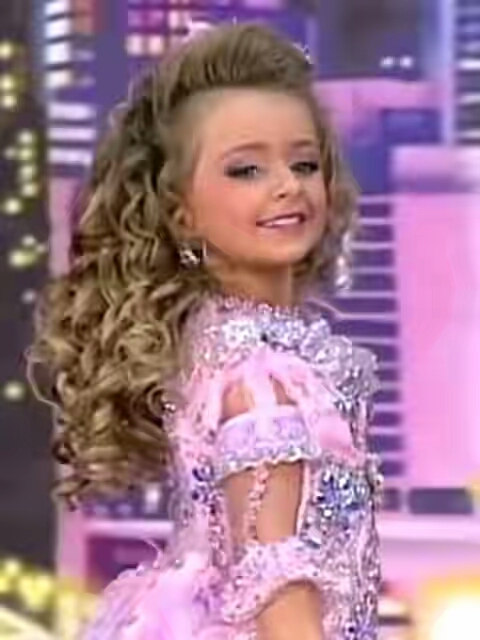 Isabella lives a life of luxury, being chauffeur driven to her favourite shopping haunts, dining on fresh lobster and attending parties with her socialite friends.

But despite the high heels, heavy make-up and bulging shopping bags, Isabella is still in primary school.

Isabella became a millionaire at just six years old after launching her own clothing and jewellery line.

Isabella’s mum, Susanna, said: “As far as what she’s worth tangible you know, it would probably be equal to several million dollars.

“The great thing is, she is still nine and so as her money grows, we hope to invest it and make that grow as well for her.

“Bella has two companies that she has equity investment; she is a stakeholder in both companies.

“So she is the major stakeholder in ‘Glitzy Girl’, which was our first company that came out. The second company was ‘Bound By the Crown Couture’.”

Isabella shot to fame after appearing on American TV show Toddlers and Tiaras.

Now the The fashion-obsessed young socialite has over 1.6 million online followers and considers herself a successful businesswoman in her own right.

Isabella said: “It feels awesome because I know everybody looks up to me which is a big responsibility.

“My fans love me, they tell me I’m really cool and just really pretty – there’s nothing not to like about being famous.”

Isabella’s prized possessions are her 60 pairs of shoes and her 14 Juicy Couture tracksuits – which she bought in one day after closing down the store.

“It’s in a lot of fashion shows it was just recently in New York fashion week which was the biggest.

“It was so much fun because I walked down the runway and all the lights hit me and I was so pretty.”

But being a young entrepreneur is not achieved without sacrifice.

Isabella said: “My life is very busy and sometimes I have to miss gymnastic because I have to go on jobs, on auditions and stuff like that.”

Isabella first got into beauty pageants when her sister, Victoria, now 22, was bullied at school.

Susanna said: “My older daughter was beaten and left for dead on the side of the road.

“She had to have reconstructive surgery on her face; her nose was pushed in by two children who used to sleep in my house growing up – her best friends.

“The pageants helped to rebuild her confidence and when Bella saw the glitz and glamour she wanted to be part of it.”

Susanna has faced some criticism online from people who say she spoils Isabella, but the 43-year-old doesn’t see splashing out as a bad thing.

Susanna said: “I’ve spoilt both of my kids. In terms of spoilt, do I think she is going to run around and be a brat and throw things at people’s faces? No – because she wasn’t raised that way.

“She definitely has expensive tastes but that’s because our family appreciates quality – it’s not because of the fame.”

Susanna has also faced criticism for allowing her daughter wear makeup at a young age.

She said: “People ask how I could out her in pageant outfits and let her wear makeup and heels but I think I’ve done a very good job – her manners are impeccable. She loves her work.”

In addition to her clothing line, Bella has also produced two songs called “LOL” and “I’m Just a Kid”, and is currently recording two more songs.

Susanna added: “I hope that she can all of those things, be a teacher, be a rockstar.

“I want her to be whatever she wants to be. As a mom, that’s all what you want for kids – just be happy.”