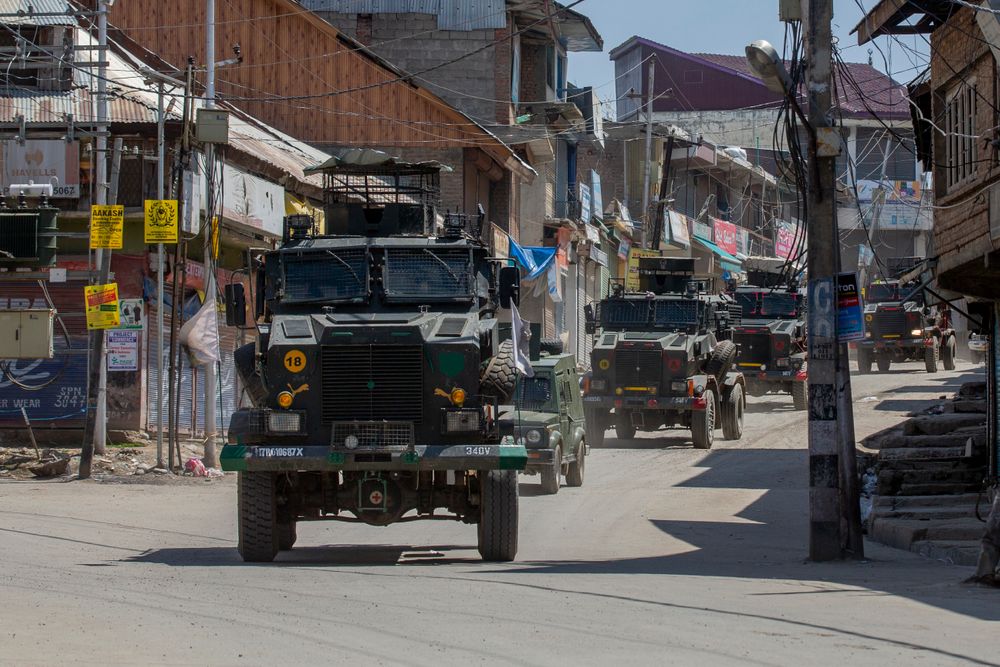 Srinagar, Apr 11: Five militants including a teenager were killed in two separate encounters in Southern Kashmir on Sunday, police said. Among five, three were killed in Chitragam area of Shopian and two in Semthan, Bijbehara area of Anantnag district. One of the slain militants identified as 14-year-old who had recently joined militancy.

A senior police officer said that three militants were killed in orchards in between Reban, Bandpawa and Chitragam villages of Shopian district.

“One militant was killed on Saturday evening after they turned down repeated surrender offers given to them by security forces,” the official said “Family of the teenager was taken to the encounter spot. He first responded to surrender offer but wasn’t allowed by the other militants and later he himself rejected surrender offers.”

He that a joint team of Police, Army’s 34 RR and CRPF launched a Cordon and Search Operation (CASO) on specific information about the presence of militants in the area.

He said that as the joint team of forces approached towards the suspected spot, the hiding militants fired upon them, which was retaliated, triggering an encounter.

Police in a statement said that during the search operation as the presence of militants got ascertained they were given an opportunity to surrender, however they fired indiscriminately upon the joint search party which was retaliated leading to an encounter. In the initial retaliatory firing, one militant was killed, but the operation was suspended to give the trapped militants another chance to surrender, the statement said.

“The joint teams exercised maximum restraint and facilitated the presence of family members of a holed up militant teenage Faisal Gulzar to encounter site so as to persuade him to surrender.

However, despite repeated appeals by his family members and assurances by the security forces, the other militants didn’t allow him to surrender. Ultimately in the wee hours, during the fierce gunfight both the trapped militants were killed and bodies of all the three killed militants were recovered from the site of encounter,” the statement said.

Police said that the slain were identified as Aasif Ahmad Ganai and Faisal Gulzar Ganai both the residents of Chitragam Kalan. However, identity of the 3rd killed militant is being ascertained. As per police records, they were part of groups involved in many militancy-related cases and linked with proscribed outfit Al-Badr”, the statement maintains.

Arms & ammunition including 01 AK-56 rifle, 2 pistols and other incriminating materials were recovered from the site of encounter. All the recovered materials have been taken into case records for further investigation and to probe their complicity in other related crimes, the statement reads.

The last rites of the killed militants shall be performed after conducting medico-legal formalities at Handwara and their nearest family members shall be allowed to participate in the last rites.

‘In this connection police have registered a case under relevant sections of law and investigation has been initiated. People are requested to cooperate with police till the area is completely sanitized and cleared off of all the explosive materials, if any.’

IGP Kashmir, according to the statement, once again made a fervent appeal to all misguided youth who have joined militant ranks to shun the path of violence and return to mainstream as the society needs them and most importantly their parents. He further said that “we will welcome and accept them with open arms.” IGP Kashmir said that newly recruited militant was given ample opportunity to come out but other militants didn’t allow him to surrender.

Police in a statement about Semthan, Bijbehara encounter said that based on a precise Police input about presence of two militants involved in various crime, hiding in a house in village Semthan Bijbehara, a joint operation was launched yesterday on 10/04/2021 by Police, 3RR Army & CRPF 90Bn.

A police spokesman in a statement said that while searching the target house, militants hiding their opened indiscriminate fire on search parties, which was retaliated.

“Amidst the ensuing encounter, all the civilians trapped in the gunfire were evacuated to safety and the operation was halted for the night,” said the spokesman.

“While ensuring all civilians are safe, the operation was resumed today morning and both the militants got killed in the exchange of fire. They were given ample opportunities to surrender and face the law. Two AK series rifles and other arms and ammunition were recovered from the possession of killed militants,” he said.

The slain militants were identified as Towseef Ahmad Bhat son of Mohammad Ramzan resident of Takia, Maqbool Shah Bijbehara and Aamir Hussain Ganie son of Ab Rashid resident of Goriwan Bijbehara, Anantnag. While as Towseef was active since 2017 and Aamir had joined militant ranks in the year 2018,” he added.

“Both of them were wanted in many crimes including in the killing of an off-duty Territorial Amt solider Mohamamd Saleem Akhoon who was killed by them near his home in Goriwan Bijbehara on Friday. After this incident, round the clock track teams set out to track them down to bring them to justice. The teams finally zeroed them in resulting in encounter,” said the spokesman.

“They were also wanted by law in Case FIR No. 07/2020 of PS Bijbehara which was registered last year after an attack on CRPF party in which one CRPF jawan had got killed. The killed duo had been threatening and intimidating the civilian population of the area and enticing the young boys to join ranks,” he said.

“The bodies after medico legal formalities have been sent for burial in presence of family members,” said police spokesman in a statement. IGP Kashmir Vijay Kumar said that militants killed in Bijbehara encounter were involved in the killing of TA Soldier who was on leave at Bijbehera.

It is pertinent to mention here that 36 militants were killed in different encounters so far this year and among them 19 belong to Shopian district alone.

Meanwhile, as a precautionary measure, internet services were snapped in Shopian, Kulgam and Anantnag districts—(KNO)