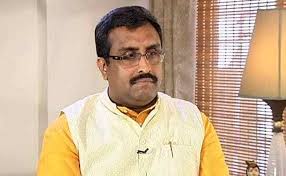 Srinagar, July 2: BJP national general secretary Ram Madhav is likely to visit Kashmir this week and to meet party leaders, works and other delegations.
Sources said that BJP workers are making arrangements to apprise him about party affairs and ground situation in Kashmir.
“He will be on a two day visit to Kashmir this week,” confirmed a BJP leader.
However, one of the party leaders, who wished not to be named, said that his visit would be personal and not an official.
On 21 October 2019, in his first visit to Kashmir, after abrogation of special status granted to Jammu and Kashmir, Madhav said he had urged all citizens of the country to plan their next honeymoon, holiday or yatra in the Valley.
On 20 November 2019, Madhav said he was in favour of the resumption of political engagement in the Union Territory “sooner than later”.
Saying that “the sky’s the limit” when it comes to demands from various quarters on the issue of Jammu & Kashmir, he emphasised that the demands should be within the ambit of the Constitution.
“I am personally in favour of, at least now that almost 100 days have passed since the decision was taken, some kind of a political engagement to start in the Valley,” he had said at an event in Delhi.(KINS)