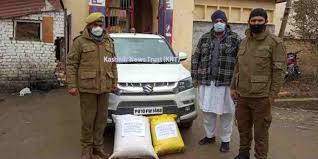 Budgam, Nov 25: Police in Central Kashmir’s Budgam district on Wednesday claimed to have arrested a Punjab resident and recovered 32 Kgs of Fukki from his possession.

An official said that during a naka checking at Sonpah crossing, Beerwah police intercepted a car bearing registration number PB10 FW /1468 and during searches 32 Kgs of fukki was recovered from the vehicle, subsequently a non-local driver was arrested.

He identified the arrested person as Harbinder Singh son of Sheriff Singh, a resident of Sehevala village of Ludhiana in Punjab.

He said that an FIR number 269/2020 under section 8/15 NDPS Act stands registered in this regard and further investigations are on. (KDC)