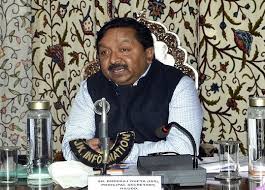 Jammu June 27: Principal Secretary, Housing & Urban Development Department, Dheeraj Gupta, today asked the elected representatives of Urban Local Bodies to take initiatives for effective implementation of the interest subsidy scheme of Government of India for the Street Vendors under the Prime Ministers Atamnirbhar Package and various other development schemes.
The Principal Secretary was speaking at a video conference meeting with the Coordination Committee of elected Presidents / Vice Presidents of various Municipal Councils/Committees of Kashmir Division.
While appreciating the efforts of Municipal Councils/Committees in fighting the pandemic, he laid emphasis on the need for continuing the coordinated efforts for mitigating the problem. He informed that more funds are being released under SDRF to ULBs for the purpose.
Responding to the demands raised by the elected representatives, he said the land for dumping sites has been identified in most of the places and in remaining places the issue has already been taken up with the concerned department. He further informed that the Government has also taken up the issue of pending 14th Finance Commission grants with the Government of India.
“The Government is also considering re-organization of manpower in various municipalities to strengthen them to meet the modern day challenges” he assured while responding to the demand raised by the participants.
He urged the Presidents to envisage establishment of busports and car parking in their respective committees /councils for which sufficient funds are available under the Metropolitan Regional Development Authority budget.
Director, Urban Local Bodies, Kashmir was directed to organize a two day convention for Presidents/Vice Presidents of ULBs to highlight the achievements of various Municipal Councils/Committees and for the training /capacity building in the best practices being followed by the progressive municipalities of the Country.
Earlier, several issues of public importance were discussed in the meeting, while a review was also taken of the ongoing campaigns against the COVID – 19 pandemic. The Chairman of the Coordination Committee, Iqbal Ahmed Ahanger, President, Municipal Committee, Doru raised several issues concerning various Municipal Councils/Committees, which included functions to be devolved under the 74th Constitutional Amendment Act, further release of funds under SDRF for effectively fighting the COVID -19 pandemic, transferring of land for dumping sites, dearth of drivers/enforcement staff and other manpower in municipalities, non release of 14th Finance Commission grants, completion of street lighting in all Urban Local Bodies, modification in Housing for All guidelines etc.
The meeting was among others attended by Director, Urban Local Bodies Kashmir, Additional Secretary, H& UDD, Altaf Ahmad, General Secretary, Abdul Karim, Secretary and several members of the Coordination Committee of Presidents/Vice President of Municipal Councils/Committees of Kashmir Division.(KNS)