Police to review ‘security of political leaders in Kashmir’ 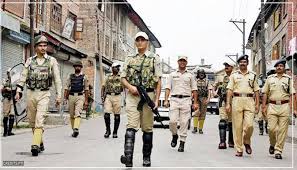 Srinagar, Aug 04: In view of the inputs that ‘militants may attack and target top political leaders’, the police is reviewing security of all political leaders in Kashmir.
Highly placed sources said that top police officers are taking all measures for the safety of politicians.
“Top police officers have issued instructions to field units to be extra careful in view of serious inputs of attack on political leaders,” top sources said.
Quoting a communication which has been sent to field units, the source said, “As per field sources militants are planning to attack on important political leaders. You are instructed to review security of all political leaders and take all precautions/measures including strengthening of their security grid and also advise them to restrict their movement only to important events and unnecessarily/ avoidable movement be avoided.”
The move comes after the deadly attack on the BJP’s young face in north Kashmir’s Bandipora on July 8 last month.
A senior police officer confirmed that the security of politicians is being reviewed and could also be upgraded on the risk assessment of different leaders. “From time to time we review the security of protected political leaders but after the political killings in Bandipora, and the recent inputs the security of party leaders is being again reviewed,” the officer said.
Sources said that the top police officials have taken the inputs seriously and are ensuring proper protection of the politicians in Kashmir. “The field officers like SPs, SDPOs and SHOs have already been apprised of the need of protecting the politicians, especially those travelling frequently to southern districts of Kashmir,” sources said.
A series of meetings, according to sources, were held, to work out the security cover for the top politicians.
Sources said that scores of leaders, including those who are protected already had sought an increase in their security cover in the wake of fresh security threats.
“One of the BJP leader’s had sought an increase in the security cover,” sources maintained.
However, in response, the leader was advised to refrain from taking unnecessary visits and not to venture out unnecessarily,” sources maintained.
The communique sent to the BJP leader who is active in the party affairs here in Srinagar reads, “In case there is a need for urgent political trip or tour, the security wing of the police and the concerned police station should be informed in advance for additional deployment of forces for security cover”.
It is advised to follow the advisor/ SOP/ Guidelines issued from time to time which is in the best interest of your personnel security and safety,” it reads
Another senior police officer said that the security advisory has already been issued to all political leaders and workers, who are protected persons, in the wake of fresh threats issued to them by the militants after an attack on a young BJP leader in north Kashmir’s Bandipora district.
“We have urged BJP and other political leaders to avoid unnecessary travel so that they remain safe. We have also asked them to inform us in advance in case they really need to go out for party related activities so that additional security will be provided to them,” the officer said, adding that not informing the security agencies about political events or other important visits can “jeopardize the security of a particular leader.”
He however said that the police can’t give nafri (security men) to each and everybody who is in politics. “We will assess the threat perception of politicians and accordingly work out a protection plan,” the officer said, wishing anonymity.
Politicians from various mainstream parties have expressed concern over their security arrangements, especially in Kashmir.
Top BJP leaders like general secretary Ram Madhav and state president Ravinder Raina had also flagged the issue of security of their leaders before police officials.
Recently, Congress sarpanch Ajay Pandita was also killed in South Kashmir.
After the revocation of Article 370 last year, the security of many politicians affiliated with different parties was downsized or withdrawn.
It is to mention here that last year a high level committee headed by chief secretary BVR Subramaniam was constituted to work out the modalities and review the cases of each individual who had requested for the security cover. (KINS)