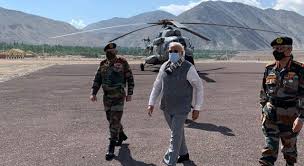 Srinagar, July 3: Prime Minister Narendra Modi after returning from the Ladakah will meet senior cabinet ministers including Home Minister, Defence minister, external affairs minister and National security advisor over the prevailing situation at the Line of Actual Control (LAC) with China, sources said.
Besides sources said that the Prime Minister has also called for the cabinet panel to meet on security to discuss the situation.
Prime Minister Narendra Modi reached Leh, Ladakh, on Friday morning to review the on-ground security situation amid the border standoff with China and the progress in talks with the Chinese military.
He reached Ladakh early in the morning, and was given a joint briefing by the Army, Air Force and the ITBP at one of the forward locations in Nimu. Modi is accompanied by Chief of Defence Staff Bipin Rawat and Army Chief General MM Naravane for the unannounced visit..
The Ladakh union territory has been at the center of the standoff with China’s People’s Liberation Army troops since early May.
Sources said that soon after the Prime Minister will return from Ladakh to New Delhi, he will meet his senior cabinet colleagues. “The Prime minister will meet the defence minister Rajanth Sihgh, Home minister Amit shah and the external affairs minister. Besides, the Prime Minister will also meet the National security advisor Ajit Doval,” sources said.
Sources said that the Prime Minister will brief his cabinet colleges about his visit to the Ladakh region.
Meanwhile sources said that the Prime Minister Narendra Modi has also called the Cabinet panel meet on Security to review the border security situation.
Top government officials had earlier only let it be known that CDS Rawat would visit Ladakh for a review of the tri-services preparedness and a first-hand understanding of the proposed de-escalation and disengagement process at the four stand-off points. It was only after PM Modi emerged from the plane that news of PM Modi’s surprise visit got out.
Sources said that Prime Minister was briefed by the Northern Army Commander Lt Gen Y K Joshi and XIV Corps Commander Lt Gen Harinder Singh at Nimu Army headquarters near Leh.(KINS)