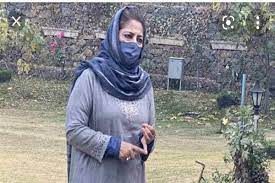 No formal invitation yet, will take decision on participation in talks with PAC: Mehbooba Mufti

Srinagar 19 June: The People’s democratic party will hold a meeting on Sunday to discuss the invitation of the centre to political parties of Jammu and Kashmir for talks.

People’s democratic party chief, Mehbooba Mufti said that there is no clear cut agenda regarding the talks with New Delhi, however, “I have asked political affairs committee of my party for a meeting to discuss the same”, she said as per Kashmir News Service.

She had received a call from the centre for a meeting on June 24 on J&K how ever there is no formal invitation yet from centre, Mehbooba said, adding that the decision of whether to participate in talks would be taken by the party for which the PAC has been called on Sunday.

“I am holding PAC meeting tomorrow to discuss the same and then take a decision whether to participate or not”, Mehbooba added.(KNS)