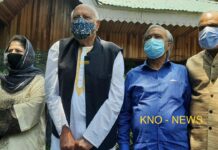 Say will represent aspirations of people of J&K and Ladakh

Srinagar, June 22: The People’s Alliance for Gupkar Declaration, a conglomerate of 5 political parties on Tuesday said that they will attend the all-party meeting called by Prime Minister Narendra Modi on June 24 in New Delhi.

Talking to the reporters after meeting at Farooq Abdullah’s residence at Gupkar, the PAGD leaders said that they have decided to attend the all-party meeting in New Delhi on June 24.

Farooq Abdullah said that their agenda in the meeting would be to represent the aspirations of the people of Jammu and Kashmir and Ladakh as well.

He said that all of them have received the invitation and they all have decided to attend the meeting, where everyone will put forth his or her point of view vis-a-vis Jammu and Kashmir and Ladakh.

Mehbooba Mufti while talking to the reporter said that they will seek the release of all political prisoners and will also represent the aspirations of the people of Jammu and Kashmir and Ladakh.

Spokesperson of the conglomerate, Mohammad Yousuf Tarigami said that they will seek whatever is possible within the framework of the India constitution. (KNS)