No country for Pak women, demand docs to travel home. 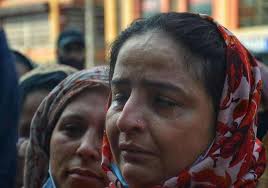 Srinagar, Feb 23: Pakistani origin spouses of Kashmiri former militants on Tuesday yet again held a protest at Press Enclave in Srinagar, demanding the travel documents so that they can visit their homes.

The Pakistan origin wives, while raising slogans marched from the Press enclave towards the iconic Ghanta Ghar in Lal Chowk and refused to leave the place.

The top officials from the administration and police later intervened and convinced the protesters to clear the road. They were later taken to the office of Divisional Commissioner Kashmir to get their grievances heard.

The group of women have held similar protests and press conferences in the past demanding the travel documents.

Saira Javid, a Pakistani bride said that, they have been meeting the officials for many years now but it has yielded no results.

Either we are asking something wrong or the government is interpreting our demands wrongly. We will continue to protest till our demands are met,” the protesting women said.

“If the government does not consider us as citizens, then they should deport us to Pakistan. Our husbands are Kashmiris and we have not committed any crime by marrying them. Kashmiri are the citizens of India and so are we,” Saira said.

She said that they do not want anything from the government but only travel documents so that they can visit their homes.

She said that the government should accept them as they have children and have families.

“Even Sania Mirza married a Pakistani cricketer and she is now a Pakistani national but she continues to represent India, then why cannot we be provided citizenship,” she said.

Many Pakistani women married Kashmiri men who had crossed the border in early 90s and later returned to the Valley under the government’s rehabilitation.