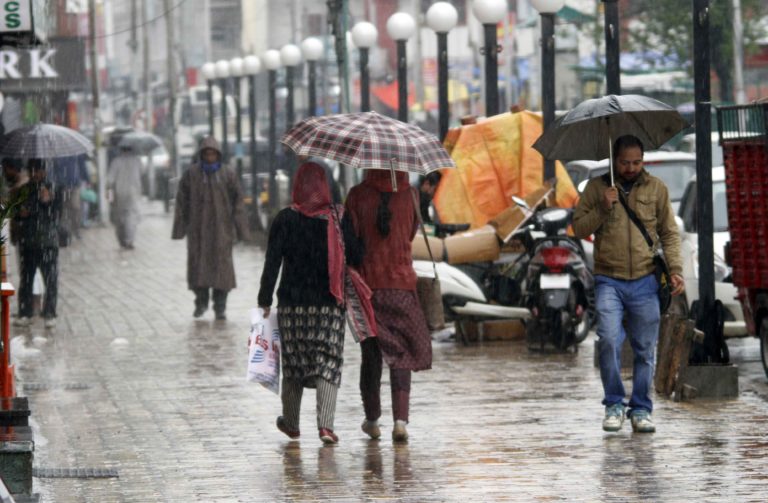 The weatherman has forecast more rain “in spells” till July 21, with main activity on Tuesday.

A meteorological department official here said that Srinagar received 1.8mm of rain till 0830 hours while the summer capital of J&K recorded maximum temperature of 27.3 degrees Celsius which is 2.5 degrees Celsius below the normal for the season. The Capital city on Sunday recorded hottest July day in eight years as mercury shot up to 35.0 degree Celsius.

Kathua district recorded downpour of 121.8mm of rain while Bhaderwah had 13.7mm of rain followed by 9.2mm in Katra, 3.4mm in Banihal and 1.6mm in Batote.

Qazigund, the gate town of Kashmir, received 14.8mm of rain and maximum temperature of 28.0 degrees Celsius, he said.

Pahalgam had highest rainfall in Kashmir Valley with 26.3mm of rain till 0830 hours and 3.3mm from 0830 to 1730 hours while the famous tourist resort recorded a maximum of 23.0 degrees Celsius. Kokernag had 9.2mm of rain even as it recorded a day temperature of 27.3 degrees Celsius, the official said.

The border town Kupwara received 2.6mm of rain while it recorded maximum temperature of 28.3 degrees Celsius against previous day’s 35.3 degree Celsius which was highest in eight years for the area, he said.

World famous skiing and tourist resort Gulmarg in north Kashmir received 2.6mm of rain and was the coldest place in Valley, recording maximum of 19.0 degrees Celsius, he added.

There are four types of colour codes signifying the level of caution: green which means no action, yellow—situation to be watched), amber –government agencies need to be prepared for severe weather and red –action needed by the agencies. (GNS)