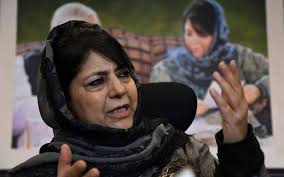 Srinagar July 31: The detention of Peoples Democratic Party (PDP) President Mehbooba Mufti was on Friday extended by three more months. Mehbooba Mufti was charged under the draconian Public Safety Act along with former chief ministers Farooq Abdullah and Omar Abdullah. However, the father and son have been released, Mehbooba continues to be under detention. Principal Secretary Home J&K Friday issued an order which reads, “Whereas District Magistrate. Srinagar in exercise of powers conferred u/s 8 (1) (a) (I) of the and Kashmir Public Safety Act, 19/8. vide order No. DM-WS:VI-1112020 dated 05-02-2020 read with coingendum Issued vide endorsement No. DMSPSA/920-24/2020 and 2836-2841 dated 06-02-2020. ordered the detention of Mehbooba Mufti daughter of late Mufti Mohd Sayed R/O Bijbehera A,P Nowgam Srinagar with a view to prevent her from acing in any manner prejudicial to the maintenance of Public Order and directed her lodgment in Subsidiary Jail DMQ.6 Transport Yard. M.A.Road. Srinagar.” “Whereas the aforesaid order of District Magistrate Srinagar came to be executed on 06-02-2020. Whereas. the Government. vide order No HOME. PB-V 1 372 of 2020 dated 14-02-2020. approved the above order of District Magistrate Srinagar, and Whereas on  receipt of opinion from the advisory  Board, the Government vide order No HOME PB-V 1543 M 2020 dater; 26-02-2020. conferred the above order of District Magistrate. Srinagar and directed the detenue be detained to the period of three months in the first instance. Whereas in exercise of powers conferred by section 10 of the Jammu and Kashmir Public Safety Act, 1978, the detenue was ordered to be shifted/moved from Subsidiary Jail. DMO-6 Transport Yard MA Road  Srinagar to Subsidiary Jail Fairview Gupkar Road Srinagar vide Government order No Home,PB-V-913 00 2020 dated 27-04-2020,” it reads. “Whereas on the reports from field formations the detention period of the detenue was further extended for three months of 05-05-2020. Whereas the period of detention of the detenue is scheduled to expire on 05.08 2020.”  “Whereas the law enforcement agencies have recommended further extension in the  period of detention and on examination the same is considered to be necessary. The Government hereby directs that the period of detention of Mehbooba Mufti be extended for a period of three months and she may be lodged in subsidiary jail Fairview Gupkar road Srinagar,” the order reads.(KINS)