Meet Anantnag’s Altaf Mir who made to Coke Studio Pakistan 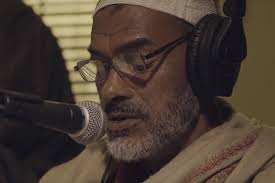 Known for his calming voice, Sufi singer Altaf Mir lived a content life by working as Handicrafts an artisan with an expertise in Aari work and chain-stitching in Janglatmandi Area in south kashmir Anantnag district now became the one of the best Sufi Singer in Coke studio Pakistan.

The video went viral on social Media networks and got sheared and likes thousands of people in all over the world.

I visited two times to Pakistan via Wagha border to meet my son I saw their my son was facing lot of hardships, my son got married with a local girl in Muzaffarabad her name is Fozia Jan, he is now the father of three sons, his elder son’s name is Mohammad Sammi, recalls Raja Begam.

Altaf Mir faced lot of hardships also in Muzaffarabad Pakistan after in year 2000 when the earthquake hits in Pakistan his house was also devastate in earthquake and left Altaf Mir in poverty. (KNB)