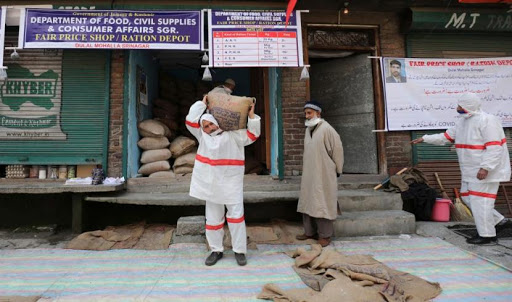 Srinagar, Jan 11: Adding more hardships to the people of Kashmir, Government has now curtailed rice and wheat quota for Kashmir Valley. Sources said that over 120371.62 quintals of food-grains (rice and wheat) have been curtailed. Store Keepers and Fair Price Shop dealers have virtually locked their stores demanding supply of rice as per the desired quota.

AAY type of ration card is given to impoverished families that do not have stable income. Unemployed people, women and old aged people fall under this category.

The families not covered under AAY, come under the PHH. The Government identifies priority household families under the Targeted Public Distribution System (TPDS).

Insiders said that the field staff involved in distribution of food-grains process is reluctant to supply ration to the consumers. Sources added that they have also been directed to make sales through Adhar Cards. “The fact is that only 60% population has Adhar Cards in Kashmir Valley. You can’t deprive those from ration who are not Adhar Card holders. We are scared of following new directions and unable to face people,” said a Store-Keeper.

Insiders added that today field staff and store keepers of Food, Civil Supplies and Consumer Affairs Kashmir in North Kashmir’s Sopore observed strike demanding full quota of food-grains. They said higher ups are reluctant to respond to the communiqué sent by the Director Food, urging them to supply full quota and stop forcing store-keepers to offer ration to the Adhar Card holders only.

Director, Food, Civil Supplies and Consumer Affairs Bashir Ahmed told KNT that curtailment of food-grains is a part of the system. “Sometimes we procure more and sometimes less,” he said.

In response to another question, the Director said 100% of the population in Kashmir is Adhar Card holder. (KNT)