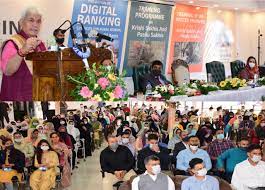 He distributed 80 Aadhar Enabled Payment Systems to promote door to door digital banking & other services in remote areas, under JKRLM.

He said Nari Shakti’s social and economic independence is the bedrock of any nation’s progress. These three new initiatives of DIGI-Pay, Krishi & Pashu Sakhi will further accelerate efforts of the J&K government in empowering women & making them key partners in the UT’s development journey, Mr Sinha said.

DIGI-Pay Sakhi has introduced financial inclusion within Self Help Group (SHG) ecosystem, creating much needed financial access points. 2000 remote villages of the UT will be covered in the 1st phase. Directed JKRLM to train DIGI-Pay Sakhis in 360° financial services training courses run by the BSE in J&K, the LG said, adding that the J&K government has started a mass movement for the socio-economic upliftment of women across the UT. A first of its kind Women Industrial Estate will come up at Udhampur Industrial Estate, further strengthening the Women Entrepreneurs Ecosystem in J&K. (KNT)