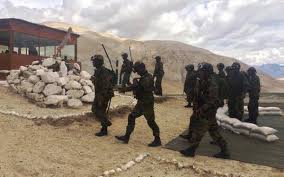 Ladakh Sep 8: There seems to be no end of border tensions between India and Chinese along the Line of Actual Control in the mountainous Union Territory Ladakh.
The fresh tensions began on Tuesday when Indian army claimed that Chinese troops fired shots in the air in Eastern Ladakh a day after India denied charges by Chinese Army that it transgressed across the LAC.
Both countries have been making heavy deployment along the LAC.
For the last one week, hundreds of vehicles laden with soldiers and ammunition have been dispatched to Ladakh from Kashmir.
Konchok Stanzin, executive councillor for the Chushul constituency in the Leh Autonomous Hill Development Council said it is for the first time that such a deployment is being made.
“I visited my constituency on August 28. There is heavy deployment of troops. Tanks are there. Roads are being constructed on war footings,” he told news agency Kashmir Indepth News Service KINS.
Pangong and Galwan fall in Chushul constituency.
Union Defence Minister Rajnath Singh has asked China to respect the LAC not try to unilaterally change the status quo, and work with India towards complete disengagement from all the friction areas in eastern Ladakh.
A senior official in Indian Army said a lot of troops who were serving in Kashmir have been deputed to LAC. “We don’t want to take any chances and make it sure LAC is strengthened before the winter,” he said.
For locals, it is for the first time since 1962 war that such a deployment of troops have been made along the LAC.
Rigzin, a resident of Chumathang, a bordering village in Ladakh said he has never seen a huge deployment along the LAC
“The LAC is tense probably for the first time since the 1962 war. The situation is unprecedented,” he said.
The sparse population in Chumathang and other nearby villages of the LAC are mainly dependent on agriculture and goat rearing.
On August 29 and 31, the India claimed that Chinese had made provocative moves and tried to alter the status quo unilaterally on the Pangong Lake’s south bank but were foiled by Indian soldiers.
China has deployed additional troops and tanks at multiple friction points in Ladakh since the latest confrontation on the Pangong Lake’s south bank in late August.
Winter begins from October in Ladakh.
“Our army he said has 4 weeks to get prepared for winter. During winter, Chinese troops have an upper hand due to easy accessibility as they have built motorable roads closer to the LAC. Besides food and fuel, the troops would need special tents and shelters,” he said.
The incursions began in May this year in Galwan valley and Pangong Lake along the LAC in Ladakh after Chinese troops apparently entered into India’s territory. On June 15, 20 Indian soldiers were killed by Chinese troops in Eastern Ladakh’s Galwan Valley, which led both the nuclear countries on the brink of war.
Tundu Prunbo, a student of Leh said apprehensions are brewing among people due to the ongoing situation.
“People are not allowed to go to Pangong. The ongoing situation has a huge impact on nomads. We will lose grazing land, cattle and nomad tribes,” he added.