Hunter’s Moon: When and where to see supermoon this weekend 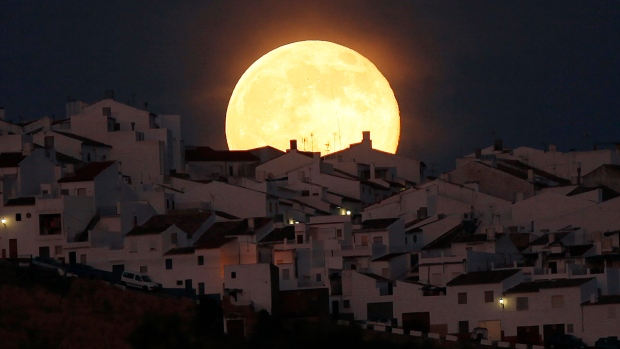 Astronomers say the Hunter’s Moon, which will appear 30% brighter and 14% bigger than usual, will be a “beautiful sight”.

A bigger and brighter moon will shine over Earth this weekend, in the second supermoon of the year.

Hunter’s Moon – also known as a Beaver moon, a Frosty moon and a Snow moon – will light up the night sky as it travels closer to Earth, appearing about 30% brighter and 14% bigger as it comes more than 12,700 miles nearer than usual

The Hunter’s Moon will be visible on Friday and Saturday night, and at peak full phase at 5.23am on Saturday.

A supermoon is the name given to the phenomenon when the moon is both full and closer to the Earth than normal.

Due to the fact it does not orbit the sun in a perfect circle, instead moving in a slight oval, it can move closer or further to Earth depending on the point of its course.

Tom Kerss, astronomer at Royal Observatory Greenwich, said he expected it to be “a really beautiful sight”, adding that the best time to see it would be around midnight on Saturday when the moon is at its highest.

Sky News weather presenter Nazaneen Ghaffar said: ”On Saturday there will be cloudy skies and outbreaks of rain across the majority of England and Wales, but by Saturday night the rain should clear off into the North Sea, allowing for clear skies to develop across many central and eastern parts of the UK.

“Those areas will have the best chance of seeing the supermoon, and it’ll also be good for those going to watch firework displays.

“Western parts of the UK and Ireland will have cloudier skies and showers through Saturday night, so unfortunately a good view of the moon is less likely across the west”.

Facts about the moon:

:: The moon orbits Earth every 27.5 days and the same side always faces us.

:: The moon is 2,159 miles in diameter – the fifth largest natural satellite in the solar system.

:: Just 24 people – all US astronauts – have seen the far side of the moon with their own eyes.

:: You would weigh just 16.5% of your Earth weight on the moon because it has a much smaller mass and a weaker gravitational pull.

:: NASA plans to return to the moon with a human mission around 2019.