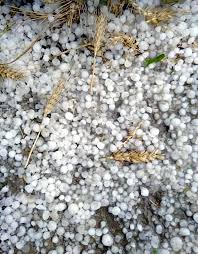 Tral, June 25: The devastating hailstorms left behind a trail of destruction in different villages of South Kashmir’s Tral town of Pulwama district.

Locals said that during the dead of the night windstorm and hailstorm plus rains damaged crops, fruits and vegetables in different villages of Tral including Hajan, Satoora, and Wantinad.

“Our crops and fruits are completely destroyed by devastating hailstorm. We have lost everything in our fields and orchards,” a local from Satoora village said.

He said that the hailstorm lasted for about 15 minutes, causing extensive damage to crops.

Similar story was narrated by Abdul Ahad from Hajan village.

The victims requested authorities to immediately assess the quantum of losses caused to the crops and fruits and provide compensation to them.

Reports of hailstorm came from several other villages of the sub district including the main town as well. (KNT)