Geelani’s letter an eye-opener; He has admitted his path was wrong, Kashmir used for personal gains: J&K DGP Dilbagh Singh 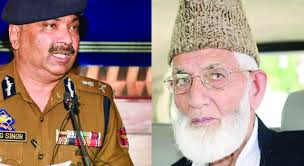 ‘At traditional infiltration routes along LoC, IB, CI grid being sanctioned in view of rising infiltration bids, 128 militants killed this year so far’

Srinagar, June 30: Director General of Police (J&K) Dilbagh Singh Tuesday said that the former chairman of Hurriyat Conference (G) Syed Ali Geelani has admitted in a letter sent by him to his all constituents that the “path choosen by him was wrong and people were using it for personal gains while the mission they were pursuing has failed.”

The DGP Singh while speaking to reporters after inaugurating the state-of art women police station at Rajouri, said: “Geelani’s letter to his constituents is an eye-opener. He has admitted that they have miserably failed their mission and Kashmir issue was used by the people for their personal gains. He has confessed that his path was wrong, and they were propagating negative thinking.”

The DGP said that in the letter Geelani has shot to his constituents, the aged leader is “crying hoarse” how drugs are being traded from LoC to this side.  On Monday, the former chairman of the Hurriyat Conference announced parting ways from the “Hurriyat forum” citing the prevailing situation as the reason. In his separate letter sent to the Hurriyat constituents, the aged leader had stated that some people sitting across LoC were luring Kashmiri youth towards drugs and the “drugged youth were not in their senses”.

The former Hurriyat chairman had also stated that the “Kashmir’s freedom struggle was reduced to mere drug abuse and serving Pakistan’s interests. He had also accused some people in the amalgam of resorting to “financial irregularities and taking decisions on behalf of him (Geelani) without his consent.”

Replying to a query whether there was any deadline set by the security forces to wipe out militancy from Kashmir in the coming months and to declare entire J&K as militancy free, the DGP said that since Pakistan continues to push in militants, no time frame or deadline can’t be set for wiping out militancy. “But our efforts are to clean areas gradually from militancy. Yesterday, a last surviving militant from Doda district was killed in an encounter with the result Doda district is militancy free,” he said.

About the successful anti-militancy operations in Kashmir, he said that this year so far 128 militants have been killed including the one ISJK militant who was involved in the recent Bijbehara, Anantnag attack in which a CRPF man and a minor boy were killed.

“This is for the first time in the past many years that in the ensuing month of June 48 militants have been killed,” he said.

The DGP said that given the inputs that Pakistan is trying to push in militants from traditional infiltration routes, security forces are going to further strengthen the counter infiltration grid on the LoC and the international border in Jammu. “Earlier, a group of Jaish men were killed at Nagrota. The militants were using Kathua and Poonch sector in Jammu. We are now strengthening our border grid on IB and LoC in Jammu and in Kashmir in Keran, Uri, Karnah as well.

We have reports that militants are trying to use Machil and Gurez routes also to get into this side,” he said. The DGP said that security forces are ready to foil all the possible infiltration bids both on LoC and IB—(KNO)