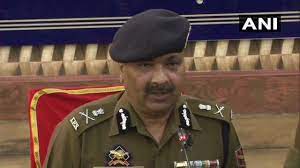 Srinagar 21 June: After three militants were killed in an encounter in Sopore’s Gund Brath area, J&K Police Chief Dilbag Singh on Monday implicitly stated that the foriegn militants are still present in the valley and are evading attention.

The presser came in the afternoon after the killing of three militants — Mudasir Pandit, Abdullah alias Asrar among two others — in an overnight encounter by teams of  J&K Police, Army and Central Reserve Police Force in Sopore.

During the press conference DGP said that only two foreign militants have been killed this year so far including the one in Sopore encounter.

Regarding the presence of militants in Srinagar, DGP said that in the city outskirts some of the militants are active who are from J&K’s Summer capital.

Replying to a query of smuggling of narcotics and weapons in Kupwara sector, he said that the drones were being used for the purpose and has stopped for now.

Previously after the overnight encounter, IGP Kashmir Vijay Kumar had said that the foreign militant killed was active in North Kashmir since 2018. He said that the killing of LeT commander Mudasir is a big relief for the local population.

As per IGP, the Top LeT commander was involved in the killing of three cops and two councillors and a couple of civilians recently. (KNB)