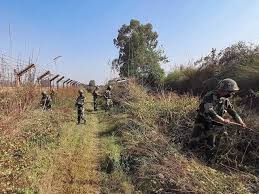 It’s snowing in area, no operation or searches launched as of now: SSP Kupwara

Officials said that no operation was launched in the Machil area nor any searches were carried due to less visibility and snowfall in the area.

A senior official said that after the BSF sentry fired some gunshots and no retaliation was reported for long, so no operation was launched in the area.

He said that BSF’s 169 BN posted at tower post in Machil reported that the sentry guarding the post fired some gunshots towards the suspected spot after observing some ‘suspicious movement’.

He said the searches couldn’t be carried in the area due to heavy snowfall as nearly 3 feet of snow has accumulated in the area and it was continuously snowing there.

Meanwhile, Senior Superintendent of Police (SSP) Kupwara, Shriram Ambarkar said that BSF said that gunshots were fired after observing some suspicious movement in the area.

Refuting the reports about the gunfight in the area, the SSP said that no operation is underway currently and no recovery has been made from the spot. “It’s snowing in the area and searches have not been launched yet,” he said

It may be recalled that on November 8, the joint security forces claimed to have foiled a major infiltration bid in the Machil sector—(KNO)