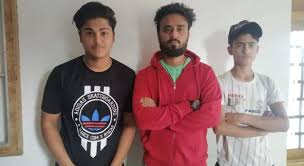 Awantipora, Nov 01: A youth with the help of his brother and cousin from Awantipora area of south Kashmir’s Pulwama district has come with the novel idea of generating electricity from a firepot.

Suhail Ahmad Parry (20), his brother Abrar Ahmad Parry (16) and their cousin Mazim Ashraf (15) from Chersoo village of Awantipora are working on many amazing things that will prove beneficial for the whole humanity.

While talking, Suhail said that from the last twenty days they were working to generate electricity from traditional Kangri and finally they have succeeded in it.

Suhail, a class 10th pass-out has applied to get admission in electrical engineering at IUST Awantipora while Abrar and Mazim-both class 8th students at Umar Memorial Institute Awantipora have been working on this project together.

“You know people from Kashmir especially students are suffering a lot due to unscheduled power cuts in the winter season and I started to work on how a person can generate electricity from his Kangri. I hope this will prove beneficial for everyone especially students across the Kashmir valley,” he said while claiming that one firepot full of charcoal can generate electricity for around 4 hours.

He said that there will be no danger in using the same firepot for heating purpose as well. “I applied the concept of using thermal energy and I have used very simple equipment like bulb, batteries, thermoelectrically cooler and wires,” he said

He said that the trio is working on different projects now like how one can we use wind energy and many other forms of energy for the benefit of mankind.

He said that they don’t need any support from the government as their sole motive is to work for the benefit of society and hopefully, they will come up with new inventions very soon—(KNO)