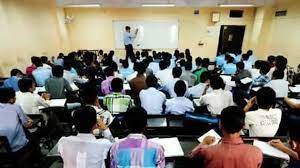 Srinagar 10 April: After testing of around three students positive for Covid19 in a private coaching institute centre in J&K’s summer capital on Saturday, the decision was taken to close the institute forthwith by the concerned authorities.

The authorities on Saturday decided to close the coaching institute (name withheld) after reporting its three students positive for Covid19.

The coaching institute has been decided to be closed for a few days and during which the classes will be conducted online for the students of the centre.

Pertinently, the government had recently ordered to shut the classwork for students till 9th standard for two weeks and from 10th to 12th for one week in all schools amid the rising cases of Covid19 in the J&K. Whereas; the authorities ordered nothing against the continuing classwork of the private coaching institutes. (KNB)