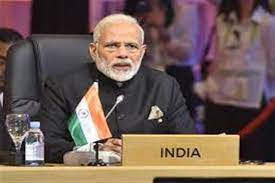 Srinagar, June 20: After Prime Minister’s invite for an all-party meeting with the leaders of Jammu and Kashmir to discuss the future course of action, the political atmosphere seems to have gained momentum in the Union Territory.

According to the information available with news agency KNS, Union Home Secretary Ajay Bhalla has invited several political leaders, including several former chief ministers and deputy chief ministers of the erstwhile state of Jammu and Kashmir, on June 24, which will be chaired by Prime Minster Narendra Modi.

The call for an all-party meeting to be chaired by PM Modi has charged the political atmosphere in Jammu and Kashmir with major political parties include PDP and NC calling for back-to-back meeting of the respective party leaders to discuss about participation in the meeting.

On Sunday, PDP held a meeting of Political Affairs Committee (PAC) to discuss about participation in the all-party meeting and future course of action regarding the same.

The virtual meeting was presided over by party president Mehbooba Mufti, wherein the participants, as per the sources, stressed upon the party chief to attend the meeting and do not shy away from dialogue.

Sources said that the PAC members also authorized party chief to take a final call regarding participation in the all-party meet and also suggested that final decision may be taken after PAGD’s meeting on Tuesday.

Meanwhile, the National Conference also held a meeting of party’s core members today to discuss regarding the participation in the all-party meeting.

Notably, this is for the first time after the abrogation of Article 370 and bifurcating Jammu and Kashmir into two Union Territories on August 05, 2019 that political activities have gained momentum in the UT with major political parties calling for back-to-back meetings of its leaders.

As per sources, People’s Alliance for Gupkar Declaration (PAGD), an amalgam of five political parties, has also called a meeting to discuss about participation.

Sources informed that PAGD might choose Farooq Abdullah, who is president of the amalgam, to represent PAGD and take part in the all-party meeting on June 24.

They said that they may also decide to participate in the all-party meeting individually and represent their respective parties instead of representing PAGD in the meeting.

National Conference Leader and Member Parliament Justice Hasnain Masoodi while talking to Kashmir News Service said that Party Party Dr. Farooq Abdullah has been authorized to decide future course of action on the Prime Minister’s invite for all-party meeting on June 24, how National conference stands firm on its Core agenda.(KNS)