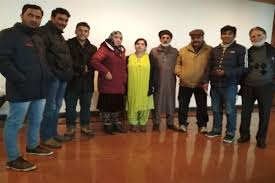 Fume at rejection of Dramas

Srinagar, Nov 25: Cultural academy announced the results of annual Drama Festival which was conducted from 5th November to 12th November 2018 at Tagore Hall, Srinagar. Six plays were performed in this academy sponsored Festival and four among six were disqualified because of their short comings while performance, like duration.
The Artists said that the other two plays were, “KHAR KALLE” written by Dr. Sohan Kaul and Directed by Hassan Javeed the other play was “PARATCHUN” which was directed by Mohammad Rafiq Dar. “KHAR KALLE” was performed by Firdous Dramatic club and “Paratchun” by Feroz Cultural forum.
“The tragic affair of the festival is the play which carried best actor and best actress award was deprived from being the best play and the other play “Paratchun” which carried second best actor and second best actress was considered as the best production,” they said.
Artists said that the three Judge committee perhaps is un-aware regarding the real essence of such festivals, they are not even aware regarding that narrative which is present in Kashmir at this time. If someone takes a position for progression of culture and dramatic traditions, he must be encouraged.
“It is mandatory in present scenario of Kashmir. Leaving this apart how come that a play which has the ingredients of being the best play got rejected because the Judges do not want that a genuine tradition of Drama should continue over here, in a way they are uprooting the rich traditions and nuances of Drama and this is the misfortune that the Traditions of drama in Kashmir is getting finished day after day,” artists added.
They further said that in this context Firdous Dramatic Club, which has been awarded with the best actor and best actress for their play “KHAR KALLE” are returning back these awards to authorities, just for a smooth revival of the Drama in Kashmir. This may be marked as a beginning of a moment for revival of drama in Kashmir. (KNS)