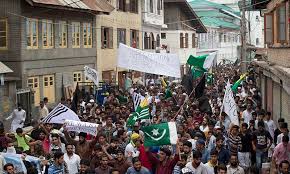 Memorandum addressed to UN pasted on the walls of UNMOGIP

Srinagar, Oct 22: A group of activists on Thursday conducted a one day seminar in SKICC in Srinagar to commemorate tribal invasion from across the border and protested against Pakistan for its support to militancy and violence in Jammu and Kashmir.

On the conclusion of seminar, a dozens of the activists of the group marched towards United Nations Military Observers Group in India and Pakistan (UNMOGIP) office in Srinagar to handover a memorandum, in which they accused Pakistan for supporting bloodshed and militancy in Jammu and Kashmir.

They were shouting slogans against Pakistan. “Pakistan Hai Hai”, “Only one solution pen solution.”

The memorandum, a copy of which is with news agency Kashmir Dot Com- (KDC) states that since a few months before and post birth of India and Pakistan and its political leadership has pursued a singular aim of scheming to create instability within the Indian Union.

Accusing Pakistan of being a rogue state in making since its creation, the group said that it was clear from their act of alleged aggression against the erstwhile princely state of Jammu and Kashmir.

The memorandum accused Pakistan of dishonoring bilateral agreements with India, in as much as the UN resolutions.

It said that the people of Jammu and Kashmir want to express their opposition to the policies of Pakistan, which has been allegedly playing politics over the blood of Kashmiris, through creation of various militant groups and violence

The memorandum further reads, “We want Pakistan to stop terror factories that are running in its territory.”

Urging upon United Nations Organization to take action against Pakistan the memorandum said, “We demand action against Pakistan for its open declaration which stated that it won’t let South Asia be it peace, until Kashmir gets solved and it is up to the world to see that if it wants to listen to bully and a terror state that has one of the most opaque form of governmental institutionalization or listen to the world’s largest democracy what has always showed its support against global initiatives taken so far.”

“Also it must be made clear that Kashmiri population has no interest in acceding to Pakistan as the history is for all to see and make conclusion and we also understand that Pakistan wants to turn Jammu and Kashmir into a vassal state to exploit the region by draining its natural resources,” the statement reads.

Later, on arriving at the gate of the UN Office in Sonwar, they pasted the copies of said memorandum on its wall and then dispersed peacefully. (KDC)