Ahead of Eid-ul-Adha, Kashmir markets abuzz but sales show slump 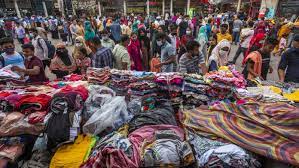 Srinagar, Jul 20: As the markets across Kashmir remained abuzz with the shoppers, the bakery and confectionery as well as the mutton dealers here have stated that the sales were not up to the expectations and that nearly 20 per cent of the material remained unsold.

Eid-ul-Adha, the festival of sacrifices is celebrated on 10th of Islamic month Zilhaj. The day is marked with offering of mass sacrifices of animals including sheep, goat, cow, buffaloes and camels.

People across Jammu and Kashmir thronged markets to busy essentials, food stuff, clothes and other items for the festival.

However, bakery and mutton remained the main attraction throughout the day where people were seen visiting to buy confectionery, bakery and meat respectively.

President of Kashmir Bakers and Confectionery Federation, Umar Mukhtar said that the market was not up to the expectations. “We had prepared only 50 per cent of the bakery on this Eid. However, only 80 per cent out of it was sold while rest remained unsold,” he said.

He added that the overall figure has not been collected yet, adding that it will be collected later in the evening or by tomorrow.

President of All Kashmir Wholesale Mutton Dealers Association (AKWMDA), Mehraj-ud-Din said that given the fact that Muslims receive meat from their neighbors and relatives on Eid-ul-Adha, the sale of mutton remained less as compared to Eid-ul-Fitr.

“We knew already that the sale would be less than previous year,” he said, adding that the figure about the sale has not been collected yet.

Meanwhile, the locals from Srinagar said that it was hard to find meat today as most of the shops were running short of mutton. “I covered almost seven kilometres to get meat. I have never seen such a situation in the past,” Nazir Ahmad, a local from Habba Kadal said.

However, he alleged that the mutton dealers didn’t adhere to the government rates as against Rs 535 government fixed rate; the mutton was sold at the rate of Rs 600.

“One fails to understand why the government failed to act despite claiming high and tall with regard to the action being taken against the norm violators,” he said—(KNO)