A Dinosaur With a Beak and Feathers Unearthed in China. 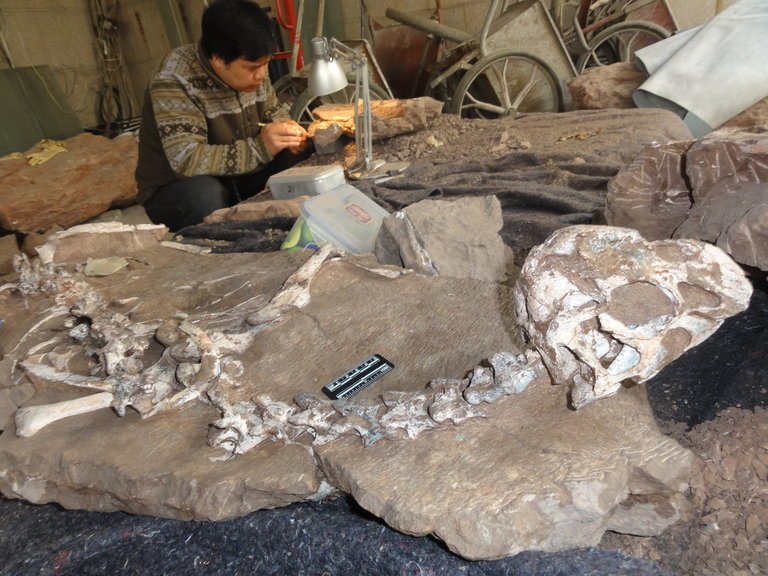 It had feathers and a beak.

It was the size of a donkey, and it did not fly.

It was not a bird, but a dinosaur that was a close relative of birds.

In a paper published on Thursday in the journal Scientific Reports, a team of scientists described a fossil of Tongtianlong limosus, a new species in a strange group of dinosaurs that lived during the final 15 million years before dinosaurs became extinct.

“They just look weird,” said Stephen L. Brusatte, a paleontologist at the University of Edinburgh in Scotland and one of the authors of the paper. Dr. Brusatte described it as “alien-looking” with a pug-nose skull and a crest.

The first fragmentary fossils of this group of dinosaurs known as oviraptorosaurs were found nearly a century ago; newly discovered, well-preserved specimens are revealing more details about them.

Tongtianlong limosus — the name means “muddy dragon on the road to heaven” — is the sixth from the region of Ganzhou. This particular fossil was unearthed four years ago by fortunate happenstance during the construction of a school. “This one was found by workmen who were blasting with dynamite,” Dr. Brusatte said. “It’s a fine line sometimes between discovery and knowing nothing.”

The fossil made its way to Junchang Lü, a paleontologist at the Chinese Academy of Geological Sciences in Beijing, who had earlier studied another oviraptorosaur from Ganzhou. (A construction boom there has created a fossil-discovery boom.)

The fossil was found in an unusual posture, its limbs splayed and head raised. The scientists think it had become trapped in a quagmire and had died as it tried to pull itself out. “It is the first oviraptorid dinosaur preserved as struggling,” Dr. Lü wrote in an email.

Dr. Brusatte, who had collaborated with Dr. Lü on earlier projects, joined the study of Tongtianlong.

Oviraptorosaurs are not direct ancestors of birds, but share a common theropod dinosaur ancestor with the lineage that later evolved to birds. Some features like the feathers come from the common ancestor, for display to potential mates or other creatures. “They were like advertising billboards,” Dr. Brusatte said.

The common ancestor had teeth, though, not beaks. For oviraptorosaurs, the beaks were “convergent evolution,” when similar features evolve independently among different groups of animals.

One of the unknowns is what Tongtianlong and other oviraptorosaurs were eating. Unlike better known theropods like velociraptors, “this guy was not a traditional meat eater,” Dr. Brusatte said. Perhaps it munched plants, nuts, insects, small animals or mollusks, Dr. Brusatte said. Or perhaps it ate a variety of foods. Or, as in birds, the beaks varied in shape among different species to feed in different ecological niches.

The six Ganzhou oviraptorosaur species discovered so far are also very different from each other, and the scientists argue that this shows rapid evolution of these dinosaurs.

That runs counter to the assertion of some paleontologists that dinosaurs were already in decline long before they became extinct 66 million years ago, most likely from the global devastation following a large asteroid impact.

“This specimen is going to give us a much better idea how oviraptorosaurs are related to each other,” said Amy Balanoff, a scientist at Johns Hopkins University in Baltimore who was not involved with the research. “One of the interesting things about these specimens that are coming out of southern China is that they show this diversity of body forms.”

She was less certain about whether the rate of evolution is as fast as Dr. Brusatte argues, because the scientists lack precise dating of the layer of rock hundreds of yards thick where the fossils have been found. “You don’t know if it’s a million years or 10 million years,” she said.