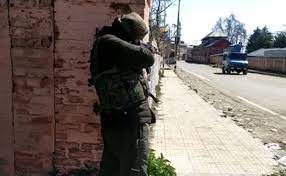 Srinagar 9 April: Seven militants were killed in two separate encounters in South Kashmir on Friday, in which one army officer and the other three soldiers were injured.

The operation in Shopian started yesterday afternoon which continued for some hours on Friday. In the encounter militants had taken shelter in a Mosque, who were killed later on. The number of militants killed in the shopian encounter was five among whom two affiliates with HM, two with AGuH and one with LeT, said IGP.

While in the Tral encounter, IGP said that a total of two militants were killed and one among them was identified as Imtiyaz Shah, a AGuH chief.

Regarding both the encounters, the army official had said earlier in the day that twin joint operations have come to an end. He also said that one army official and three other soldiers were injured in the Shopian encounter and were later on evacuated to base hospital.

However, during the two operations, 7 AK rifles and two pistols were recovered from the sites of operation, said IGP. (KNB)