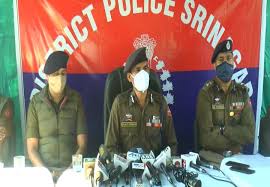 Srinagar: Thirteen militants, four of them foreigners including top commander Saiffullah, were killed this month in Kashmir Valley, officials said.

Part from it, he said a Lashker-e-Toiba module was busted in Srinagar city by arresting six associates of militants involved in highway attacks.

“We will focus more on foreign (militants) in coming days,” he said, terming the recent operation as big success to the security establishment. (GNS)